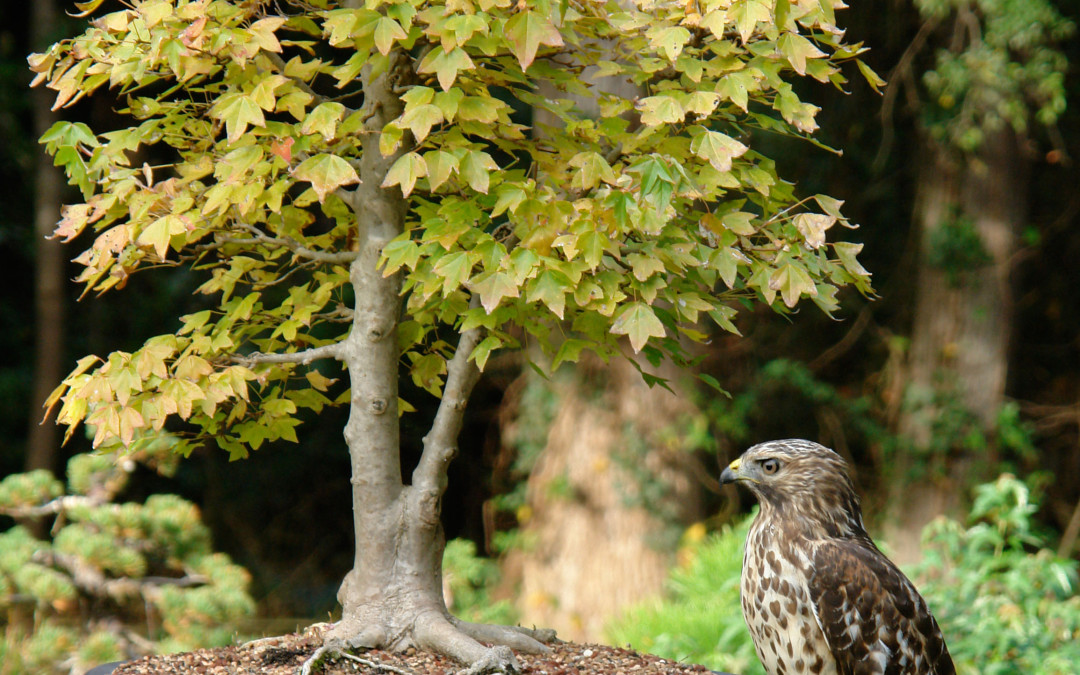 Of all the maple species one might attempt as bonsai, the Trident maple has to rank among the very best. There are many varieties of maples which offer more interesting foliage forms, but there are none which are as adapt at becoming bonsai as is the Trident. Tridents might well be described as the “junipers” of the maple family. Like junipers and black pines, they offer all the characteristics necessary to create a truly great bonsai and seem to actually thrive on container cultivation. Tridents tend to have a natural upright growing form and can be shaped into almost any style. The plant has a small leaf to begin with, which becomes smaller when grown in containers and even smaller yet, when bonsai defoliation techniques are employed. The tree will accommodate massive root pruning and will develop large trunks and fused root buttresses in a relatively short time. It buds back on old wood readily and develops branch ratification quickly.

Trident maples are sun loving trees. They should be given full exposure to as much sun a possible each day. The exception might be trees that are planted in very shallow pots, which tend to dry out more quickly… Although it should be noted that Tridents are more drought tolerant than many other species of tree.

Tridents should be transplanted in the early spring… just before… or as the buds are beginning to swell. This may occur anywhere from late February to mid-April depending upon where you live. Tridents experience a period of intense root growth in the week or two just before they bud. If you plan to do any serious branch pruning on your tree this is a good time, because even very large cuttings (as big as your wrist) will root easily during this period. Trees should be kept in a cool, shaded environment for about two weeks after transplanting and should be protected from freezing.

A standard general purpose bonsai potting soil is recommended. It should provide for excellent drainage. Soil mixes used by the Bonsai Learning Center include turface, pine bark chips, fragmented granite and haidite (expanded shale). The composition is 75% aggregate materials with the pine bark making up the final 25% and acting as the organic component.

If transplanted at the correct time, Trident maples may be aggressively root pruned removing as much as 65 % of the root system with little fear of damaging the tree. If the tree is transplanted at other times of the year, you should be more conservative about removal of roots and always, always, defoliate the tree just before making the out-of-season transplant.

Defoliation of a Trident maple (or any other tree) as a simple matter of course is NOT good horticulture, nor is it good bonsai. Although Tridents are tough plants and put up with any number of bumbling bonsai antics, the business of leaf defoliation places a considerable strain on the tree. It is unwise to strain a tree if it is not necessary. You should there fore have a good reason for defoliating your tree. Those reasons might include: 1. out of season transplant; 2. bug eaten or damaged foliage; 3. a need for smaller leaves or brilliant fall color in time of a bonsai exhibition. Please don’t do it simply because you think it cool. 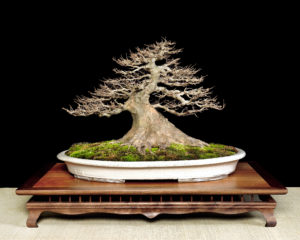 Defoliation will get you smaller leaves which stay on the tree longer into the fall months and deliver more brilliant fall color. Defoliation “shocks” the tree into a second springtime growing cycle. Therefore, if you choose to defoliate, it must be TOTAL, over the entire plant. It is very dangerous to defoliate only one or two branches (to do so may result the tree shutting down those branches in favor of the ones which still have leaves) and in no case should you defoliate a tree more than one time in any one growing season.

Although Tridents are somewhat drought tolerant, they prefer a moist, but not soggy soil. If you are using a good bonsai soil mixture, it will requiring daily watering during the growing season and perhaps more frequently during the hot summer months. Keep the soil somewhat dryer during the winter months to minimize frost damage to roots. Tridents are completely winter hardy plants in the Carolina’s. Root systems can tolerate temperatures of 10 to 15 degrees even for prolonged periods. Too much water will result in yellow or pale leaves and reduced vigor.

There is a relationship between the amount of water and fertilizer you give a tree and the amount of inter nodal space and leaf size which occur. For young trees where lots of growth is needed a general purpose fertilizer (chemical) which is high in nitrogen should be used. For older, mature trees a slow release organic fertilizer which is lower in nitrogen will result in smaller leaves and more controlled growth. I fertilize all bonsai twice per month during the regular growing season. Note: During fall months a fertilizer which is high in phosphorus and low in nitrogen will help the plant to harden off and store up energy for the coming winter months.

If your tree is healthy, vigorous pruning will result in fast growth and rapid branch ramification. Large cuts made on tridents tend to heal quickly, but it is still advisable to cover larger cuts with a wound sealant. Trident bark expands very quickly in the spring and early summer. It is therefore advisable to avoid large scale wiring projects until the late summer or fall. Winter is even better, because the trees are devoid of leaves and may be more easily wired. Tridents willingly throw buds on old wood, but you should remember that the key to getting a tree to bud back is to get light and air into the branches where you wish leaves to appear.