Definition – Semi Cascade: This style is often seen in nature hen trees are growing on or near vertical rock faces or by the side of rivers and lakes where light reflects off the water to the underside of the branches, encouraging the lower branches to extend over the water. 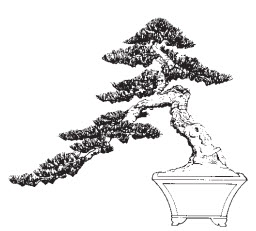 Generally to qualify as a semi-cascade the trunk line should lie between 45 degrees above and just below horizontal, terminating at or a little below the level of the pot rim. This is not a precise rule and much depends on the visual mass of the bonsai design – a strongly horizontal mass would still be classified as a semi-cascade even if it came well below the pot rim. As with slanting style, any exposed roots can be seen to form a counterbalance to the angle of the trunk. Many species are suited to growing as semi-cascade. The exceptions are those that have forcefully upright growth, such as Ginko, Cryptomeria and Bald Cypress.

Definition – Cascade Bonsai: This represents a tree growing on a mountain side leaning out towards the light. Its own weight plus the weight of winter snow or even avalanches and rock falls, contributes to the trunk growing downwards. Generally, the bonsai trunk line falls below the horizontal with the trunk terminating below the level of the bottom of the pot. However, this is not precise, as a strong downward visual mass may be classified as cascade even if the terminal does not extend so far as the pot base. As with semi-cascade, this style is not appropriate for trees with strongly upright growth.

Containers: Containers for cascade and semi-cascade are usually tall and heavy. This mass is usually needed to “counterbalance” the visual weight of the tree. Shapes may be round, square or hexagonal and are usually of an unglazed ceramic, however, with fruiting or flowering species, compatible glazed containers may be used.

Types Of Material: Almost any species can be grown as cascade or semi-cascade. Exceptions (several noted above) are those which have a vigorous upright growing habit. Generally, evergreens such as pine and juniper are used, because at the altitude where such “cascading” would occur in nature, these would be the most probable species. That does not, however, eliminate others species. Look for material which will bud back willingly and has an even growing habit. 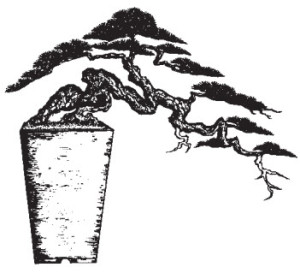 KENGAI Bonsai is the Japanese word for Cascade. Han-Kengai is the word for semi-cascade. Both styles can be group into two approaches: single and double line cascade.

Single line cascade describes a form which comes out of the container and falls directly downward. It is, in essence an informal upright turned upside down.

Double line cascade describes a form in which the number one branch of an informal or slant style bonsai become the cascade portion of the tree.

Potting: As noted above, a deep pot is always used for cascades. If possible, plant the tree in the middle or slightly towards the back of the container, being careful that the trunk does not touch the edge of the container.

Position and placement of trunk line: In the classical sense, a direct line can be drawn between the apex (if any), root base and growing tip of the cascade. This requires that the cascading portion of the tree turn back inwards toward the trunk and helps to bring balance to the whole. 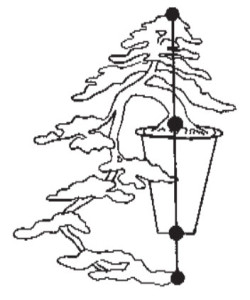 It should not be regarded as a hard fast rule. In some cases, cascades can move away from their container and create a striking effect. Care must be taken to insure the planting does not look off balance. Branches, as with most bonsai, occur to the outside of curves. In cascade, however, the pot
often conflicts with the placement of branches in what would otherwise be their correct position. A branch would not grow into a hillside… it must, therefore, not grow into the side of a container. Cascade offers flexibility in this regard, often allowing branches to be placed in front and back positions which would not normally be acceptable if the plant were styled as an upright. Impact and overall effect are the keynotes in cascade design. Concern yourself more with artistic effect and less with mechanics.

Care and maintenance: Cascade and semicascade respond to the same kinds of care which most bonsai thrive on. However, because the growing tip extends below the pot and hence, the root mass, transmission of nutrients to the growing tip can be slow. For that reason, foliar feeding, particularly of the lower branches is recommended. Care must also be taken to keep upper growth in check so that it does not outrun and overshadow the lower and slower cascade branches.

Information and illustration for this publication were extracted with grateful thanks from Bonsai Techniques by John Naka and The Complete Book Of Bonsai by Harry Tomlinson.