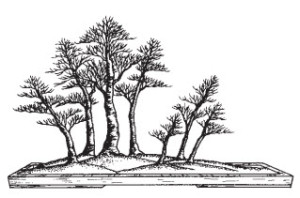 Definition: A bonsai planting consisting of more than one trunk can technically be considered a “group” planting. Twin and triple trunk plantings are generally not thought of as forests, but the principles inherent in their construction are repeated and ramified in the construction of a forest planting. It is therefore to the advantage of a beginning student to master the principles of twin and triple trunk plantings before attempting a forest. Forests are generally multiple tree plantings where the primary emphasis is placed on the trees. This can be contrasted with “Saikei” which also includes multiple trees, but also may include other types of plant material (ferns, grasses, etc.), and usually contains a high percentage of rock which is a featured element in the overall planting.

Containers: Containers are generally shallow unglazed trays. Since the objective is to create the illusion of a landscape and not the showcasing of a single specific tree, the wide, low container provides the artist with a larger “canvas” upon which to place his or her creation. Since trees are usually the featured aspect of a forest planting (unlike saikei), a more reserved container is recommended.

Material: Virtually any material can be used in the preparation of a forest planting. Usually the same material is used throughout. This assists in the horticultural maintenance of the planting. Mixed forests can be done, but the artist should take care to select species which share a preference for the same growing conditions. It would not be wise, for instance, to place pine and yew together in the same container. Material need not be of perfect bonsai proportions. Since the objective is the impact of the total forest, individual trees which may have flaws independently, can be arranged together to provide maximum impact. ie. The whole is greater than the sum of its parts.

Size of Material: You will need a variety of trunk diameters and heights to achieve a well balanced forest. Two or three primary trees are required as well as a like number of secondary trees and a like number of minor or background trees. Since the planting will be made in a shallow container, the use of raw nursery material is not recommended. It is better that prospective plant materials be cultivated for one or two years in shallow container to encourage lateral rooting, while at the same time eliminating deep rootage.

Number of Trees: Forest plantings usually consist of an odd number of trees ranging from three to nine. The oriental reasoning for the use of odd numbers is often explained through the use of mythology or parable. In actual fact, odd numbers are used because they promote asymmetry, and generally, things in nature occur in an asymmetrical fashion. This is not to say that an effective forest planting cannot be made using four, six or eight trees. Likewise, more than nine trees can be used in the creation of a forest. Remember that the more trees which are used, the more difficult the task of maintaining asymmetrical balance in the overall planting.

Preparation: Forest plantings usually take a long time to prepare. This means that tender plant roots must be cared for or they will dry out and die. Place root masses in a soak tank (preferably filled with Vitamin B1) or cover the root balls with wet cloth or paper towels while you are attempting to determine the final arrangement. Since preparation of a forest planting usually requires a great deal of “messing” with the plants roots , it is suggested that you only attempt forest plantings in the early spring, just as the trees begin to push buds to insure they are at their most vigorous point.

Aftercare: Forest plantings should be given the same aftercare as any freshly transplanted bonsai. Provide shade or indirect sunlight for at least two weeks, and gradually expose the plant to more and more sun after that period. Provide high humidity and frequent mistings. Use Vitamin B1 supplements such as Superthrive often and protect planting from drying winds.

Forest are arranged in “Units” and “Elements” usually consisting of three trees each. In the example at the right, shown from above, a primary, secondary and tertiary units are each visible and each consist of at least one primary element (tree) and two secondary elements. Each element forms a triangle and the central tree in each element likewise forms a triangle. Also note the position of units are to the back and side of the container, and positioned in a circular manner, forcing visual inspection to proceed from left to right and then back to the left again. 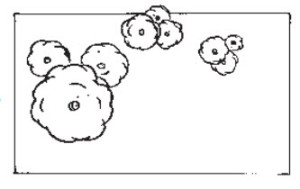 We will consider only the distant view here. In this case, larger trees are arranged toward the front of the planting and smaller shorter trees are arranged toward the back. This creates the illusion of depth and even though the container is shallow, great perspective may be achieved. Also, please note that trees are usually placed towards the back and side of the container, leaving somewhat of a “clearing” in the foreground. This again adds to the perspective and feeling of depth. Note also that soil masses are not usually flat and even, but rise and fall within the container to help create the wide landscape effect. Rocks may be used in a forest planting if they are an integral part of the theme and if their emphasis is subordinate to that of the trees 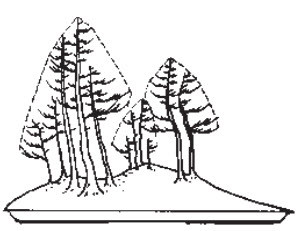 In the view on the left, (seen from the front), each unit in the forest can be seen to have its own triangle. The forest always contains at least one primary tree and one or two additional secondary trees. Forests may be constructed in the near or distant view perspective. 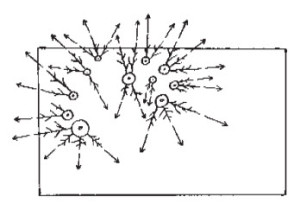 Branches in a forest planting should point outward. Branches which grow inward are generally removed because the conflict with the sightlines necessary for proper impact of the forest planting and also because such branches will be blocked from the light and will eventually weaken and die. Placement of the branches generally follows the rules for proper placement and balance in a single trunk bonsai.

Remember that the triangle is as important in the construction of a forest bonsai planting as it is in the creation of a single trunk tree. Forests do not have to be straight trunked creations, nor do they have to have a great number of trees to be effective. Remember the rules of asymmetrical balance and don’t be afraid to attempt slant style forests, windswept forests, or to feature a really large tree as the centerpiece in your forest to create great depth. 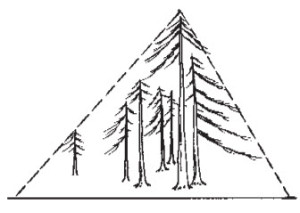 Information and illustrations for this publication were extracted with grateful thanks from Bonsai Techniques by John Naka and Bonsai, Its Art, Science, History and Philosophy by Deborah R. Koreshoff.