Literati bonsai is an “approach” or “interpretation” within bonsai and not a specific style in and of itself. It is somewhat difficult to describe. However, we shall try. 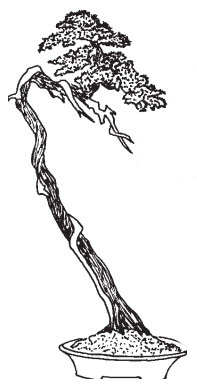 Consider the following comments by bonsai artist Harry Tomlinson: Also called bunjin, this style of tree is often seen at the seashore or in areas where trees have grown up reaching for the light in competition with other trees that have since died or been felled. Characteristically, the trunk line flows or twists through several curves. Some trees grow this way with old age – the Scots pine naturally assumes this style in maturity. Most conifers can be recommended for growing as literati, and rugged deciduous trees such as flowering apricot and hawthorn.

Difficult to define precisely, this style breaks many rules but nevertheless the trees have an air of refined elegance. Curiously, the name literati (Latin, meaning “educated” or “literate people”) is used in the absence of an English equivalent for the Japanese bunjin, which in turn is a translation of the Chinese word wenjin, the name for Chinese scholars practiced in the arts. The slender trees in their paintings had an abstract, calligraphic quality that was the inspiration behind cultivating bonsai in this style.

Now consider the comments of American bonsai master, John Y. Naka: The bunjin style of bonsai is so free hat it seems to violate all the principles of bonsai form. The indefinite style has no specific form and is difficult to describe, however, its confirmation is simple, yet very expressive. No doubt its most obvious characteristic are those shapes formed by old age and extreme weather conditions.

Trees pictured (in old master sumi paintings) with crossed trunks and branches would be messy and confusing in any other bonsai style, but is acceptable in a bunjin style. On a formal upright style, a branch that returns back to the trunk and crosses it would be unacceptable, and such a violating arrangement would grate against the senses. However, on a bunjin style such a reversal can give an exciting dramatic tension and a freedom to the tree.

If one were to characterize the literati approach to bonsai design one might use words such as: elegant, simplistic, clean, tall, slender or flowing.

In most cases all would be acceptable. A general bonsai cannon states that there is “symmetry in asymmetry” and “balance in unbalance.” If we accept this concept the literati approach to bonsai design becomes easier to understand.

A literati may assume the style of a cascade, semi-cascade, formal upright, informal upright or indeed any of the five basic styles. Its approach can likewise be expanded to include variations on the basic styles such as twin trunk, forest planting, multiple trunk, etc.

The very essence of good literati necessitates a departure or modification (if not a total break) with the traditional bonsai values regarding line, balance and form. It then becomes necessary for the student to have a clear understanding of these concepts and how they work through all bonsai styles in order to find, identify and exaggerate the elements in their material which will best lend themselves to the literati approach.

In a word… If it feel good… do it! But, be prepared to defend your choices on solid bonsai artistic grounds. Although bunjin sometimes reflects the bizarre and unusual, tieing your tree in a knot is insufficient grounds for dubbing it a literati.

How then to proceed. Literati generally focus on the line of the tree and less upon concepts such as mass and trunk taper. A good many literati have very little taper at all, and most have few branches usually located near the top of the tree. Generally speaking, two thirds of the total height of the tree is free from branches. Movement of the trunk can be flowing or angular and you should look for some unusual aspect of the material to feature. 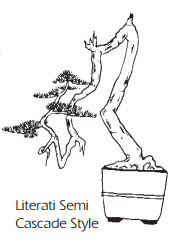 Since a literati trunk usually features quite a bit of movement, Junipers (because of their elasticity) make excellent bonsai subjects. Pine also work well as do a large number of other evergreens. Deciduous species do not work as well because of their tendency to break and for foliage to always assume an upward growing path. This does not mean they won’t work, just that they are more difficult. Don’t be afraid to try. You may be the one to open a new frontier in bonsai design. Remember that the true excitement in a literati design is in the innovative way that it contradicts traditional values. Find the unusual or exotic in your tree and use it to good advantage.

Because of the movement, single trunk literati usually are planted in a shallow round or oval container. Trays are also acceptable and can be used in conjunction with rock or stone. In the case of ovals or trays, the tree are usually something other than uprights and should be planted somewhat off center. Remembering the rule that literati design should be simple… overly ornate or heavy glazed containers are generally avoided.

Literati bonsai require the same kinds of care as do all bonsai with two small additions. First, because of their “tall” design they tend to be top heavy. In a good wind they can easily blow off a bench. You may want to tie them in place. Second, foliage should be kept relatively sparse. The general elegance of literati design prohibits heavy top foliage on a slender trunk with little taper.