The proper techniques for arranging bonsai for public viewing is almost an art unto itself. Indeed, If the artist’s objectives are to adhere to the formal rules governing traditional Japanese display techniques (known as Keido) then months, if not years, must be spent learning and understanding artistic and philosophical precepts which underlie the art. 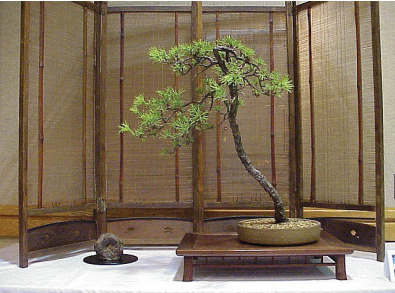 Much of what Keido teaches, however, is grounded in artistic principals which are universally understood. Proper balance, proportion and relevance remain the same regardless of which side of the planet a person lives on, or what their cultural heritage may have been. Western precepts of good artistic composition are as valid as Asian precepts, and because those who will view our presentations come from similar backgrounds, will perhaps work more effectively for us.

The term “proper display” is relative, because the environment in which the bonsai will be displayed must be taken into account. There is one way to display a tree inside your home; yet another way to display a bonsai on your deck or in your garden; still another if the bonsai is to be displayed with others in a club show at the local shopping mall; and still others, if it will be seen alone in a special viewing area such as an alcove or a tokonoma. Each of such viewing locations must be taken into account and the arrangement and inclusion (or exclusion) of various display elements adapted to the particular situation. 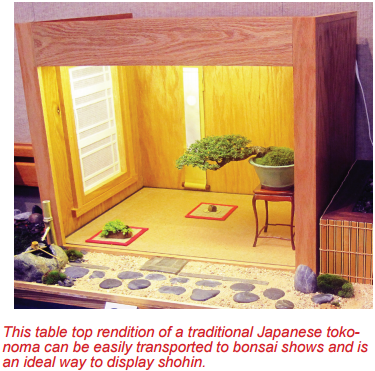 Correct placement of elements in a viewing alcove is perhaps the best way to discuss the principals necessary for proper presentation. It allows us to contain all the various design elements in one isolated location so that they can be clearly understood. Thereafter, the principals used for construction of a alcove display may be modified for use in the garden or at the mall.

Westerners are very fond of using Japanese terminology and “tokonoma” is the word most Westerners use when referring to an alcove for the viewing of bonsai. What most people construct, however, is not a “tokonoma”, but more correctly, a “viewing alcove”. Both are essentially boxes with one side open for viewing. That is where the similarities end. The traditional Japanese tokonoma is built to specific dimensions to accommodate the use of traditional floor mats known as tatami. They are usually located just inside the entrance to the home or in a special room specifically set aside for the viewing of objects in the tokonoma and are usually constructed very low and close to the floor, because when the viewer is inspecting the tokonoma’s contents he or she is usually kneeling or seated on the fl oor, thus making it the correct viewing height.

The Western version of a “tokonoma” is also a box, but it’s size and dimensions can vary greatly from something that is built into the decor of the room to something which can be carried by one person or assembled and disassembled for transport to a bonsai exhibition. They are usually constructed at a height which will provide optimal viewing for a person who is either standing or sitting in a chair. For purposes of Western display of these elements can and often do vary, but what must be maintained is the austerity of the “tokonoma’s” interior. It is plain and devoid of all adornment. It is usually painted in a neutral color such as off-white or ivory and will contain lights in the ceiling of the “box” to illuminate the objects within. Essentially, it is an empty “stage” onto which one may construct and display their bonsai masterpiece. Any location in which you would stage a bonsai display should likewise be as austere as possible. 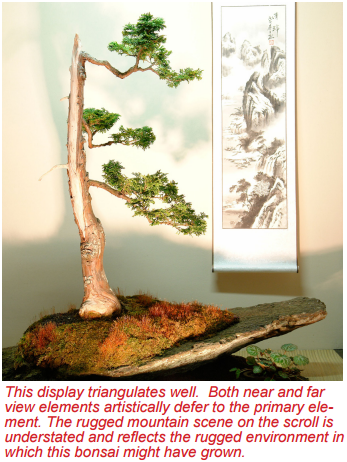 The elements use in construction of a “tokonoma” or alcove display are usually (but not always) limited to three items. They are: 1 – the focal element; 2 – the near view element; and 3 – the distant view element.

1. THE FOCAL ELEMENT – In this discussion, the focal element is the bonsai. However, this primary element need not be a bonsai. It might be an ikebana or other flower arrangement a suiseki or viewing stone or some other art object as well as any stand, table or diaza on which it is mounted. Whatever is selected, it must be remember that it is the primary reason for the display. Care must be taken to insure that other elements in the composition defer to it visually.

2. THE NEAR VIEW ELEMENT – This is usually referred to as the accent piece or accent plant. It is always an object which is smaller than the focal element (bonsai) and especially selected to harmonize and compliment that primary focal element. It may be another smaller bonsai, an accent grass or kusomona planting, an arrangement of mosses, a figurine or even a viewing stone or suiseki. Numerous possibilities present themselves.

3. THE DISTANT VIEW ELEMENT – Think of this as the background painting for your composition. Unlike the focal element and the near view element, this is usually a two dimensional object. Traditionally, with the Japanese, it has been a scroll painting. With a Western approach, items other than scrolls may be used. These might include a painting or drawing with or without a contemporary frame. Again, it must be remembered that the item used should compliment and harmonize with the focal element of the composition.

Putting It All Together

Proper selection and arrangement of the three elements outlined above will result in a composition which has an underlying “natural” harmony. Why focal, near and distant ? Because it is a “natural” progression.

Imagine yourself standing in a field looking at a magnificent oak or a majestic pine. This is your “focal element.” Between you and the tree you are viewing you see a deer quietly grazing in the grass or a small grouping of flowers or grasses. This is the “near view element.” Beyond the tree in the background you can see the distant mountains, the moon rising over the river or a hawk soaring in the sky. This is the “distant view element.”

Our objective in bonsai is to distill and focus those elements which we see in nature into a man made composition which presents those elements artistically in a contained space.

A tokonoma display is almost always thematic in some way, although it is not required to be so. Such themes might reflect the seasons, such a spring or fall or they might place emphasis on a special holiday such as Christmas or Thanksgiving or they might be prepared to honor a visiting guest who has just returned from a vacation in the Rocky mountains. Whatever theme you choose the elements used in your final composition should reflect three aspects: 1 – Relevance, 2 – Subordinance, and 3 – Balance. 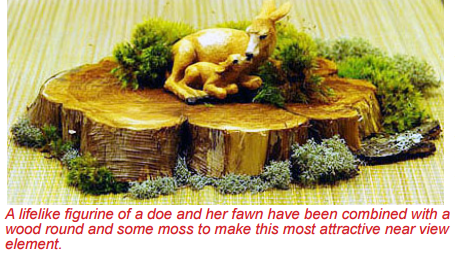 RELEVANCE – The objects select for each element should relate to each other in a logical and natural context. A bonsai displaying springtime flowers might be displayed with a photograph of a bird or a scroll depicting the branch of a blooming tree. Its accent might be a small pot of spring time grasses or a figurine of a young fawn. A deciduous tree displayed without leaves in the wintertime might be shown with a scroll painting or photo of the winter moon and accented with a few colorful leaves or a pine cone. A bonsai in fall foliage color might be accented with a small basin stone or a figurine of a cricket. The possible artistic combinations are limitless, but they should be selected with deference to entire composition. This brings us to the next aspect to consider. S

UBORDINANCE – The tree is the thing. It is the primary reason for the display in the first place and if you include other elements in the composition which unnecessarily draw attention away from the tree (no matter how relevant they may be) then you have lost sight of the original objective – which was to show the tree. Both near and distant view elements along with such other variables as pot selection and choice of display stands, need to defer and be subordinate to the tree itself. If someone viewing your composition for the first time makes comments like: “Wow, cool pot.” or “Gee, look at that cute little bunny,” you may be assured you have done something wrong, regardless of how “cute” the bunny is or how “cool” the pot. 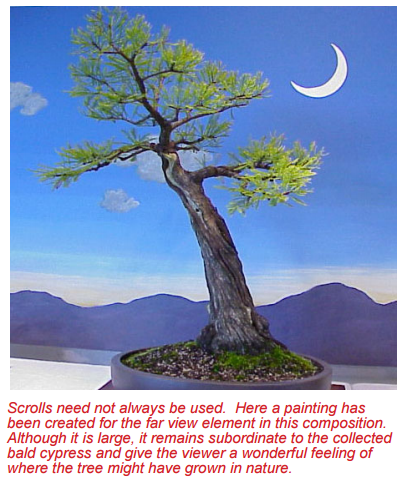 BALANCE – Arrange the three elements in your composition in such a way that they have an asymmetrical balance. Apply the same kind of criteria to arranging elements in a display as you would to arranging elements in your bonsai. Triangulate the composition and avoid placement of elements in such a way as to obstruct other elements in the same way that you would arrange branches on your bonsai to avoid confusion. Generally elements are never placed in the center of the display space. The tree or central focal element is commonly placed midway into the space and to the left or right of center depending upon the movement of the tree. Distant view elements are generally mounted on the back wall of the tokonoma and placed slightly higher and in the direction of the tree’s line of movement. Near view elements are generally positioned in the direction of the trees movement as well and slightly in front of the tree. These are guidelines and are not cast in concrete. The artist’s intuition plays a key roll in determining the final outcome.

Just as in the creation of a bonsai, the production of an outstanding display, depends as much upon the artist’s “feeling” as it does about the rules and regulations. When you have hit upon the right combination of tree, stand,accent and scroll you will instinctively “feel” it. When trying to decide what combination of elements will work remember some of the precepts you have learned by studying bonsai. Avoid being “cute” at all costs. Artwork and figurines used must be very realistic or very tastefully stylized. Remember, “less is more.” Make the simplest statement you can. If done well, it will “speak” quietly and profoundly and be heard by all those who view it. 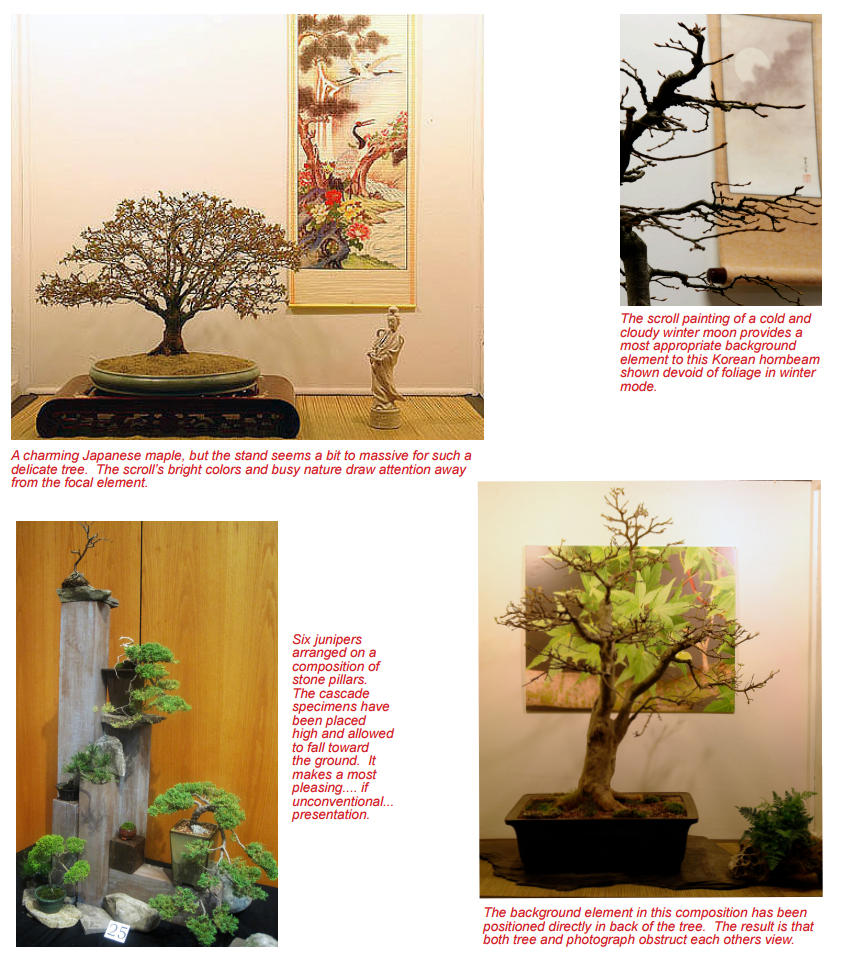